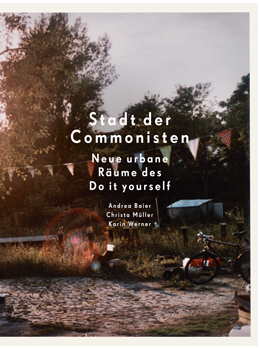 What a good thing it was to leave my former work space at home to mingle with betahaus members and guests during their Thursday morning breakfasts – I stumbled upon two great things, one of them was this book. I could hardly resist to not carry it home straight away and ordered it via the publisher’s website transcript directly. A day later I discovered it in the Moritzplatz bookstore, but oh well, long live anticipation. There’s nothing better than waiting for the postman with a new book parcel.

The book charters the current movements and philosophies of the new DIY (-> Do It Together = DIT), as was the overarching theme of the Pixelache festival last year (they called it DIWO = Do It With Others; there seems to be many versions!). It is beautifully done with photo essays and a glossary of new terms (similar to many other books dealing with new and alternative movements – there seems to be the need to invent and circulate a new language which I find very intriguing!). Curiously, it was three sociologists and researchers, of which one is also an issuer at transcript Verlag, who initiated and conceived the book. They did a really nice job, I recommend the book to everyone!

Return of the Commons
Posted by katharina on 15 August 2013